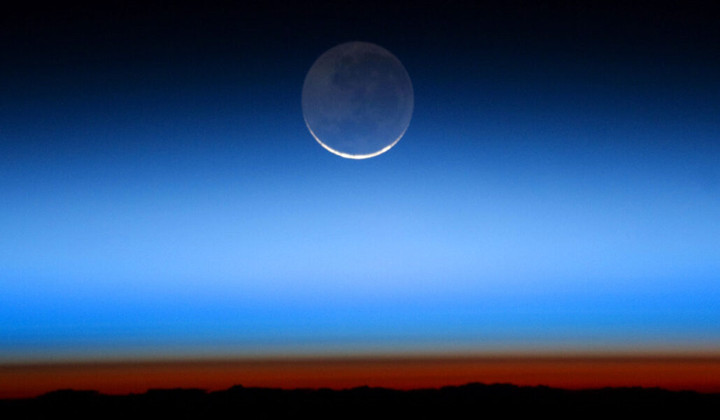 The amount of sunlight that Earth reflects back into space — measured by the dim glow seen on the dark portions of a crescent moon’s face — has decreased measurably in recent years. Whether the decline in earthshine is a short-term blip or yet another ominous sign for Earth’s climate is up in the air, scientists suggest.

Our planet, on average, typically reflects about 30 percent of the sunlight that shines on it. But a new analysis bolsters previous studies suggesting that Earth’s reflectance has been declining in recent years, says Philip Goode, an astrophysicist at Big Bear Solar Observatory in California. From 1998 to 2017, Earth’s reflectance declined about 0.5 percent, the team reported in the Sept. 8 Geophysical Research Letters.

Using ground-based instruments at Big Bear, Goode and his colleagues measured earthshine — the light that reflects off our planet, to the moon and then back to Earth — from 1998 to 2017. Because earthshine is most easily gauged when the moon is a slim crescent and the weather is clear, the team collected a mere 801 data points during those 20 years, Goode and his colleagues report.

Much of the decrease in reflectance occurred during the last three years of the two-decade period the team studied, Goode says. Previous analyses of satellite data, he and his colleagues note, hint that the drop in reflectance stems from warmer temperatures along the Pacific coasts of North and South America, which in turn reduced low-altitude cloud cover and exposed the underlying, much darker and less reflective seas.

“Whether or not this is a long-term trend [in Earth’s reflectance] is yet to be seen,” says Edward Schwieterman, a planetary scientist at University of California, Riverside, who was not involved in the new analysis. “This strengthens the argument for collecting more data,” he says.

Decreased cloudiness over the eastern Pacific isn’t the only thing trimming Earth’s reflectance, or albedo, says Shiv Priyam Raghuraman, an atmospheric scientist at Princeton University. Many studies point to a long-term decline in sea ice (especially in the Arctic), ice on land, and tiny pollutants called aerosols — all of which scatter sunlight back into space to cool Earth.

With ice cover declining, Earth is absorbing more radiation. The extra radiation absorbed by Earth in recent decades goes toward warming the oceans and melting more ice, which can contribute to even more warming via a vicious feedback loop, says Schwieterman.

Altogether, Goode and his colleagues estimate, the decline in Earth’s reflectance from 1998 to 2017 means that each square meter of our planet’s surface is absorbing, on average, an extra 0.5 watts of energy. For comparison, the researchers note in their study, planet-warming greenhouse gases and other human activity over the same period boosted energy input to Earth’s surface by an estimated 0.6 watts of energy per square meter. That means the decline in Earth’s reflectance has, over that 20-year period, almost doubled the warming effect our planet experienced.