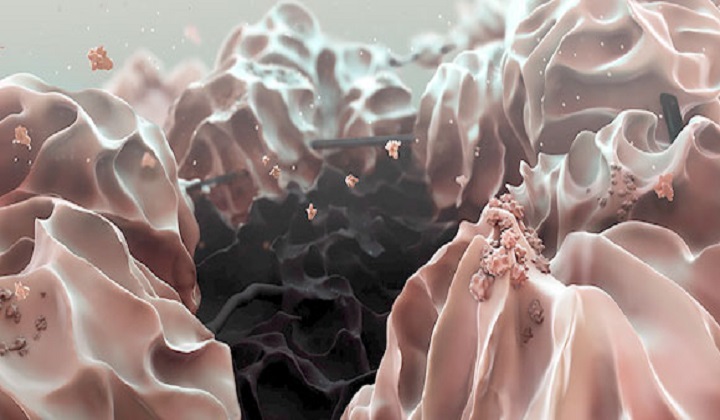 Using a highly porous graphene electrode, scientists have developed a lab-based demonstrator of a lithium-oxygen battery which has higher capacity, increased energy efficiency and improved stability over previous designs.

Scientists have developed a working laboratory demonstrator of a lithium-oxygen battery which has very high energy density, is more than 90% efficient, and, to date, can be recharged more than 2000 times, showing how several of the problems holding back the development of these devices could be solved.

Lithium-oxygen, or lithium-air, batteries have been touted as the ‘ultimate’ battery due to their theoretical energy density, which is ten times that of a lithium-ion battery. Such a high energy density would be comparable to that of gasoline – and would enable an electric car with a battery that is a fifth the cost and a fifth the weight of those currently on the market to drive from London to Edinburgh on a single charge.

However, as is the case with other next-generation batteries, there are several practical challenges that need to be addressed before lithium-air batteries become a viable alternative to gasoline.

Now, researchers from the University of Cambridge have demonstrated how some of these obstacles may be overcome, and developed a lab-based demonstrator of a lithium-oxygen battery which has higher capacity, increased energy efficiency and improved stability over previous attempts.

Their demonstrator relies on a highly porous, ‘fluffy’ carbon electrode made from graphene (comprising one-atom-thick sheets of carbon atoms), and additives that alter the chemical reactions at work in the battery, making it more stable and more efficient. While the results, reported in the journal Science, are promising, the researchers caution that a practical lithium-air battery still remains at least a decade away.

“What we’ve achieved is a significant advance for this technology and suggests whole new areas for research – we haven’t solved all the problems inherent to this chemistry, but our results do show routes forward towards a practical device,” said Professor Clare Grey of Cambridge’s Department of Chemistry, the paper’s senior author.

Many of the technologies we use every day have been getting smaller, faster and cheaper each year – with the notable exception of batteries. Apart from the possibility of a smartphone which lasts for days without needing to be charged, the challenges associated with making a better battery are holding back the widespread adoption of two major clean technologies: electric cars and grid-scale storage for solar power.

“In their simplest form, batteries are made of three components: a positive electrode, a negative electrode and an electrolyte,” said Dr Tao Liu, also from the Department of Chemistry, and the paper’s first author.

In the lithium-ion (Li-ion) batteries we use in our laptops and smartphones, the negative electrode is made of graphite (a form of carbon), the positive electrode is made of a metal oxide, such as lithium cobalt oxide, and the electrolyte is a lithium salt dissolved in an organic solvent. The action of the battery depends on the movement of lithium ions between the electrodes. Li-ion batteries are light, but their capacity deteriorates with age, and their relatively low energy densities mean that they need to be recharged frequently.

Over the past decade, researchers have been developing various alternatives to Li-ion batteries, and lithium-air batteries are considered the ultimate in next-generation energy storage, because of their extremely high energy density. However, previous attempts at working demonstrators have had low efficiency, poor rate performance, unwanted chemical reactions, and can only be cycled in pure oxygen.

What Liu, Grey and their colleagues have developed uses a very different chemistry than earlier attempts at a non-aqueous lithium-air battery, relying on lithium hydroxide (LiOH) instead of lithium peroxide (Li2O2). With the addition of water and the use of lithium iodide as a ‘mediator’, their battery showed far less of the chemical reactions which can cause cells to die, making it far more stable after multiple charge and discharge cycles.

By precisely engineering the structure of the electrode, changing it to a highly porous form of graphene, adding lithium iodide, and changing the chemical makeup of the electrolyte, the researchers were able to reduce the ‘voltage gap’ between charge and discharge to 0.2 volts. A small voltage gap equals a more efficient battery – previous versions of a lithium-air battery have only managed to get the gap down to 0.5 – 1.0 volts, whereas 0.2 volts is closer to that of a Li-ion battery, and equates to an energy efficiency of 93%.

The highly porous graphene electrode also greatly increases the capacity of the demonstrator, although only at certain rates of charge and discharge. Other issues that still have to be addressed include finding a way to protect the metal electrode so that it doesn’t form spindly lithium metal fibers known as dendrites, which can cause batteries to explode if they grow too much and short-circuit the battery.

Additionally, the demonstrator can only be cycled in pure oxygen, while the air around us also contains carbon dioxide, nitrogen and moisture, all of which are generally harmful to the metal electrode.

“There’s still a lot of work to do,” said Liu. “But what we’ve seen here suggests that there are ways to solve these problems – maybe we’ve just got to look at things a little differently.”

“While there are still plenty of fundamental studies that remain to be done, to iron out some of the mechanistic details, the current results are extremely exciting – we are still very much at the development stage, but we’ve shown that there are solutions to some of the tough problems associated with this technology,” said Grey.

The authors acknowledge support from the US Department of Energy, the Engineering and Physical Sciences Research Council (EPSRC), Johnson Matthey and the European Union via Marie Curie Actions and the Graphene Flagship. The technology has been patented and is being commercialized through Cambridge Enterprise, the University’s commercialization arm.