To Tackle the New Coronavirus, Scientists Are Accelerating the Vaccine Process May 20, 2020 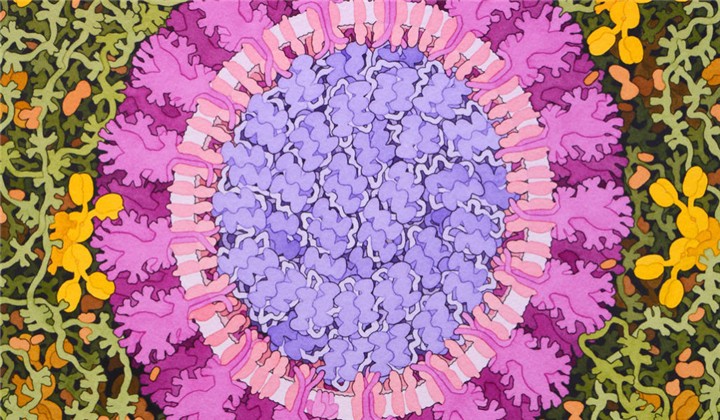 Researchers are turning to nontraditional approaches to create vaccines and therapeutics

As a mystery illness started spreading in China in late December, researchers at Inovio Pharmaceuticals were keeping a close eye on what was happening, even before anyone knew the cause was a coronavirus.

The company, based in San Diego, is no stranger to the viruses. After MERS, which is caused by a different coronavirus, emerged in 2012, Inovio was one of the first to develop a still-experimental vaccine for the disease. In the new outbreak, as soon as Chinese researchers posted the genetic makeup of the virus, dubbed SARS-CoV-2, the company’s scientists sprang into action.

“We’d all hoped that there would be enough overlap that our previously developed MERS vaccine would be helpful in this case,” says Kate Broderick, Inovio’s senior vice president for research and development. Like MERS and SARS, the new virus is a coronavirus that uses RNA as its genetic material.

But in-depth analysis revealed that the two coronaviruses are too different for a vaccine against MERS, also known as Middle East respiratory syndrome, to take down the new virus. So the company’s researchers set about designing a new vaccine.

That design relies on a relatively new approach to vaccine creation, one that the researchers used to develop the MERS vaccine. Traditional vaccines are composed of weakened or killed forms of viruses or parts of viruses, including purified proteins. When injected into a person, the immune system recognizes the virus as an invader and produces antibodies to stave off future invasions. But growing enough debilitated viruses or purifying enough proteins to make vaccine doses for millions of people can take months or even years.

So Inovio and other companies have developed ways to make vaccines much more quickly. For their SARS-CoV-2 vaccine, Inovio scientists convert the virus’s RNA into DNA and select pieces of the virus that computer simulations have suggested will prod the immune system into making antibodies. Those selected bits of DNA are then inserted into bacteria, which produce large quantities of protein snippets to be used in the vaccine. This approach drastically shortens the time it takes to make a vaccine. A traditional vaccine takes two to three years to develop. For Inovio’s product, it took three hours to design and about a month to manufacture, Broderick says.

Inovio started testing the vaccine in animals at the beginning of February and hopes to begin safety tests in people by early summer.

Even so, Inovio’s vaccine is still at least a year away from being widely used. As the number of cases of the novel coronavirus disease, or COVID-19, continues to rise, several other groups are also racing to develop vaccines and therapeutics that take nontraditional approaches to fight the virus.

Novel vaccines for a novel coronavirus

Researchers at the U.S. National Institute of Allergy and Infectious Diseases, working with the Cambridge, Mass.–based biotechnology company Moderna, are developing a messenger RNA, or mRNA, vaccine that will stimulate the body to produce vaccine components. Messenger RNAs are copies of protein-making instructions encoded in the DNA of genes. Cellular machinery reads the mRNA instructions to build proteins.

Scientists have selected portions of SARS-CoV-2 that may spark a vigorous immune reaction against the virus, says Kizzmekia Corbett, a viral immunologist at the NIAID’s Vaccine Research Center in Bethesda, Md. The mRNA vaccine will tell human cells which viral proteins to make, she says.

“We’re literally giving the cells a genetic code of our vaccine design, delivered as RNA that will tell cells, ‘Hey, make this protein,’” says Corbett, who is the scientific lead on the center’s effort to develop the vaccine.

Those proteins — Corbett wouldn’t say which viral proteins — will then prod the immune system to make antibodies to protect against the virus. Since the body does all of the protein-production work with the mRNA vaccine, researchers can skip the time-consuming and costly step of manufacturing vaccine proteins.

Corbett would not specify a timeline for her team’s mRNA vaccine, but Anthony Fauci, director of NIAID, has said the mRNA vaccine could be ready for initial safety testing within months. But the researchers have yet to find a pharmaceutical company to manufacture the large quantities of mRNA doses that would be necessary for use by the general public, Fauci said February 11 in Washington, D. C., at a discussion of the new coronavirus at the Aspen Institute, a nonprofit organization.

Inovio’s experience with its MERS vaccine is one example of just how long it typically takes to make sure a vaccine is safe and effective. Inovio conducted initial safety testing of the MERS vaccine in a Phase I clinical trial from February 2016 to May 2017. There were no serious side effects among the 75 healthy adult participants, the researchers reported in 2019 in the Lancet Infectious Diseases. The vaccine moved into a Phase II trial in August 2018 to test safety in a larger number of people and determine whether the vaccine spurs the immune system to make protective antibodies. That trial is expected to wrap up later this year.

Even if everything goes swimmingly, the MERS vaccine must still pass Phase III safety and effectiveness testing before being considered for approval by the U.S. Food and Drug Administration. It’s the same gauntlet that all new vaccines and drugs must run.

Inovio and the NIAID/Moderna partnership have both received funding from the Oslo-based Coalition for Epidemic Preparedness Innovations. CEPI is also funding yet another type of novel vaccine development. CEPI and researchers from the University of Queensland in Brisbane, Australia, have found a way to clamp down on the coronavirus to keep it from infecting cells.

The Queensland group had already been working with CEPI on molecular clamp vaccines against other viruses for about a year, says Trent Munro, a biotechnologist involved in the work. A molecular clamp is a protein stitched onto another protein, in this case the coronavirus’ spike protein. With SARS and MERS, spike proteins work a bit like malleable lock picks, changing shape to interact with a protein on the surface of human cells and gain entry into them. The 3-D structure of SARS-CoV-2’s spike protein, reported online February 19 in Science, confirms the protein is also a shape-shifter. But the new coronavirus’ spike protein clings 10 to 20 times as tightly to its target on human cells as the SARS version does. Holding on tighter may help the new virus spread more easily from person to person, researchers say.

The molecular clamp the Queensland team devised keeps the spike protein from shape-shifting, locking it in a form that triggers antibody production and thus making it a potent vaccine, Munro says.

The team uses mammalian cells to produce the vaccine, and a specialized machine determines which cells are churning out clamped protein. With the machine, researchers can “do things that would have taken weeks before in just days,” Munro says.  Laboratory testing may start within weeks. Safety testing in people may begin in months, but it will take much longer for the vaccine to be ready for general use. When the Queensland group began working with CEPI to develop a molecular clamp vaccine, “we thought it would take three years as a test case,” Munro says. But the emergence of the new coronavirus forced the researchers to accelerate their efforts. Still, Munro estimates it will be at least a year before the vaccine will be ready.

“I know the timeline feels long,” he says. “I imagine it feels just unacceptable to those folks who are in areas of serious outbreak, but at least we have a way of . . . pushing things forward as fast as possible.”

CEPI has calls out for additional vaccine development proposals. On January 31, the organization announced that it would work with CureVac AG, based in Tübingen, Germany, to develop another mRNA vaccine targeting the novel coronavirus.

Beating vaccines to the punch

Vaccines help keep people from getting infected with disease-causing organisms but may not help once someone is already infected. But a shortcut to getting protection — a shot of the protective antibodies themselves — may both prevent infections and treat them.

People who have recovered from infections retain antibodies in their blood against the virus or bacteria that caused the illness, often for years or decades. Such antibodies may give some protection when the person encounters a similar infectious organism later on. But, crucially, these antibodies can also protect others. And quickly.

It can take weeks to months for vaccines to prod the immune system into making protective levels of antibodies, says Christos Kyratsous, vice president of infectious disease research and viral vector technologies at Regeneron Pharmaceuticals. Ebola vaccines, for example, take at least a week to stimulate antibody production, but shots of “antibodies offer immediate protection,” Kyratsous says. (Regeneron Pharmaceuticals, headquartered in Tarrytown, N.Y., is a major financial supporter of Society for Science & the Public, which publishes Science News.)

But giving people antibodies from survivors doesn’t always work. Regeneron and other companies have developed antibodies that can more reliably offer protection. The company is already testing antibodies against Ebola and the MERS virus. Clinical studies and laboratory work with the company’s MERS antibodies suggests that they can help protect against infection and treat established infections, Kyratsous says.

The company is now developing antibodies against the new coronavirus. “We have learned a lot of things from the MERS project that we can now apply to the novel coronavirus project,” Kyratsous says.

For instance, the team has learned more about which viral proteins and parts of proteins make the best antibody targets. Proteins on the surface of the virus that are needed for infection, such as the spike protein, are generally the best bets, he says.

Regeneron researchers have made SARS-CoV-2 proteins in the lab and injected them into mice that have human versions of antibody-producing genes. These “humanized mice make fully human antibodies,” Kyratsous says, and could provide a ready supply. As soon as those antibodies are available, the company hopes to test their efficacy against the virus in the lab. If that works, safety testing in animals and people may start soon.

The team also hopes to work with people who have recovered from COVID-19 to get antibody-producing cells from their blood. But, Kyratsous says, harvesting antibodies from people isn’t something that can be easily scaled up.

Still, despite the rapid reaction of these and other scientists, vaccine and antibody protection for most people is still far off.

“In an acute situation, you’re not just going to pull a vaccine out of your pocket,” NIAID director Fauci said at the Aspen Institute discussion. If the current outbreak proves to be “really bad,” the FDA may be able to authorize emergency use of promising vaccines that haven’t completed full safety and efficacy testing. But researchers won’t know for at least six months whether any of the vaccines in development help against SARS-CoV-2.

Other strategies to fight the new virus, including repurposing existing drugs used against other diseases, including HIV and hepatitis C, are also under way. But there’s no clear winner yet among those candidates. For now, people exposed to the virus must rely on their own immune systems and supportive care from doctors and nurses to fight off the disease.