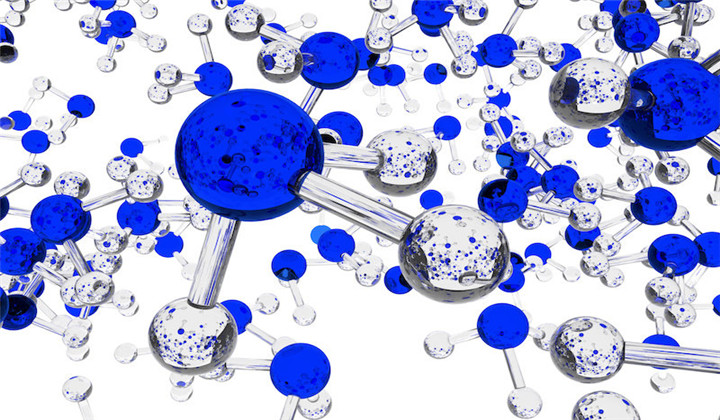 A molecule of ammonia, NH3, typically exists as an umbrella shape, with three hydrogen atoms fanned out in a nonplanar arrangement around a central nitrogen atom. This umbrella structure is very stable and would normally be expected to require a large amount of energy to be inverted.

However, a quantum mechanical phenomenon called tunneling allows ammonia and other molecules to simultaneously inhabit geometric structures that are separated by a prohibitively high energy barrier. A team of chemists that includes Robert Field, the Robert T. Haslam and Bradley Dewey Professor of Chemistry at MIT, has examined this phenomenon by using a very large electric field to suppress the simultaneous occupation of ammonia molecules in the normal and inverted states.

"It's a beautiful example of the tunneling phenomenon, and it reveals a wonderful strangeness of quantum mechanics," says Field, who is one of the senior authors of the study.

The experiments, performed at Seoul National University, were enabled by the researchers' new method for applying a very large electric field (up to 200,000,000 volts per meter) to a sample sandwiched between two electrodes. This assembly is only a few hundred nanometers thick, and the electric field applied to it generates forces nearly as strong as the interactions between adjacent molecules.

"We can apply these huge fields, which are almost the same magnitude as the fields that two molecules experience when they approach each other," Field says. "That means we're using an external means to operate on an equal playing field with what the molecules can do themselves."

This allowed the researchers to explore quantum tunneling, a phenomenon often used in undergraduate chemistry courses to demonstrate one of the "spookinesses" of quantum mechanics, Field says.

As an analogy, imagine you are hiking in a valley. To reach the next valley, you need to climb a large mountain, which requires a lot of work. Now, imagine that you could tunnel through the mountain to get to the next valley, with no real effort required. This is what quantum mechanics allows, under certain conditions. In fact, if the two valleys have exactly the same shape, you would be simultaneously located in both valleys.

In the case of ammonia, the first valley is the low-energy, stable umbrella state. For the molecule to reach the other valley -- the inverted state, which has exactly the same low-energy -- classically it would need to ascend into a very high-energy state. However, quantum mechanically, the isolated molecule exists with equal probability in both valleys.

Under quantum mechanics, the possible states of a molecule, such as ammonia, are described in terms of a characteristic energy level pattern. The molecule initially exists in either the normal or inverted structure, but it can tunnel spontaneously to the other structure. The amount of time required for that tunneling to occur is encoded in the energy level pattern. If the barrier between the two structures is high, the tunneling time is long. Under certain circumstances, such as application of a strong electric field, tunneling between the regular and inverted structures can be suppressed.

This effect is completely reversible and nondestructive: As the electric field is decreased, the ammonia molecules return to their normal state of being simultaneously in both wells.

For many molecules, the barrier to tunneling is so high that tunneling would never happen during the lifespan of the universe, Field says. However, there are molecules other than ammonia that can be induced to tunnel by careful tuning of the applied electric field. His colleagues are now working on exploiting this approach with some of those molecules.

"Ammonia is special because of its high symmetry and the fact that it's probably the first example anybody would ever discuss from a chemical point of view of tunneling," Field says. "However, there are many examples where this could be exploited. The electric field, because it's so large, is capable of acting on the same scale as the actual chemical interactions," offering a powerful way of externally manipulating molecular dynamics.

The research was funded by the Samsung Science and Technology Foundation and the National Science Foundation.