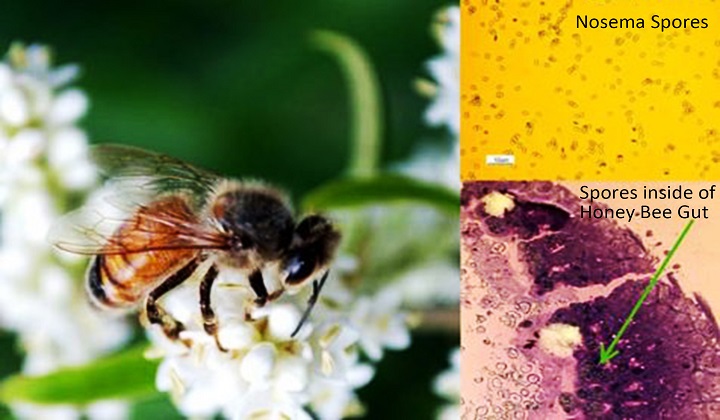 An Agricultural Research Service entomologist has discovered the Nosema ceranae parasite that causes major problems and death in honey bees works by hijacking its host’s iron for itself.

Iron is as essential a micronutrient for honey bees as it is for people. Honey bees usually get enough to meet their needs from their flower pollen diet. They use iron in their immune system and for reproduction and development. As does Nosema ceranae.

“In a number of mammal species, there is an iron tug-of-war between host and pathogen that is part of the central battlefield that determines the outcome of an infection. But this has not been explored before in honey bees and not with Nosema,” explained entomologist Yan Ping “Judy” Chen. She is with the ARS Bee Research Laboratory in Beltsville, Maryland.

When Chen tracked iron in N. ceranae-infected honey bees, she found iron is also a part of the honey bee’s physiological struggle with the parasite, as it is in the mammalian system.

If honey bees lose the battle of infection with N. ceranae, the gut parasite begins to hijack the iron in the flower pollen that the honey bee has eaten before the bee can absorb it, diverting the iron into its own spore reproduction.

“This only results in greater iron deficiency for the honey bee as the increasing transferrin level just gives the N. ceranae the opportunity to scavenge even more iron from the bee host for its own proliferation and survival,” Chen said.

Since there is no truly effective treatment for N. ceranae, this study suggests a welcome possibility for a new treatment that might be based on regulating iron or the synthesis of transferrin, Chen added. This will be of interest for beekeepers, researchers, and policymakers worldwide.

N. ceranea is one of the major parasite problems causing beekeepers’ colony losses today. It is a microsporidiann, a member of a group of single-celled parasites closely related to fungi. Originally, N. ceranae was a parasite only of Asian honey bees (Apis cerana). But in the late 1990s, it jumped species to the European honey bees (Apis mellifera) that we have in this country.

This research was published in Plos Pathogen.