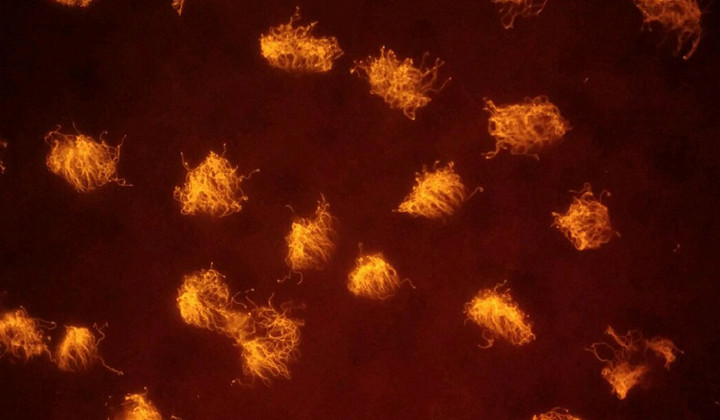 Using blobs of skin cells from frog embryos, scientists have grown creatures unlike anything else on Earth, a new study reports. These microscopic “living machines” can swim, sweep up debris and heal themselves after a gash.

Scientists often strive to understand the world as it exists, says Jacob Foster, a collective intelligence researcher at UCLA not involved with this research. But the new study, published March 31 in Science Robotics, is part of a “liberating moment in the history of science,” Foster says. “A reorientation towards what is possible.”

In a way, the bots were self-made. Scientists removed small clumps of skin stem cells from frog embryos, to see what these cells would do on their own. Separated from their usual spots in a growing frog embryo, the cells organized themselves into balls and grew. About three days later, the clusters, called xenobots, began to swim.

Normally, hairlike structures called cilia on frog skin repel pathogens and spread mucus around. But on the xenobots, cilia allowed them to motor around. That surprising development “is a great example of life reusing what’s at hand,” says study coauthor Michael Levin, a biologist at Tufts University in Medford, Mass.

And that process happens fast. “This isn’t some sort of effect where evolution has found a new use over hundreds of thousands of years,” Levin says. “This happens in front of your eyes within two or three days.”

Xenobots have no nerve cells and no brains. Yet xenobots — each about half a millimeter wide — can swim through very thin tubes and traverse curvy mazes. When put into an arena littered with small particles of iron oxide, the xenobots can sweep the debris into piles. Xenobots can even heal themselves; after being cut, the bots zipper themselves back into their spherical shapes.

Scientists are still working out the basics of xenobot life. The creatures can live for about 10 days without food. When fed sugar, xenobots can live longer (though they don’t keep growing). “We’ve grown them for over four months in the lab,” says study coauthor Doug Blackiston, also at Tufts. “They do really interesting things if you grow them,” including forming strange balloon-like shapes.

It’s not yet clear what sorts of jobs these xenobots might do, if any. Cleaning up waterways, arteries or other small spaces comes to mind, the researchers say. More broadly, these organisms may hold lessons about how bodies are built, Levin says.

With the advent of new organisms comes ethical issues, cautions Kobi Leins, a digital ethics researcher at the University of Melbourne in Australia. “Scientists like to make things, and don’t necessarily think about what the repercussions are,” she says. More conversations about unintended consequences are needed, she says.

Levin agrees. The small xenobots are fascinating in their own rights, he says, but they raise bigger questions, and bigger possibilities. “It’s finding a whole galaxy of weird new things.”